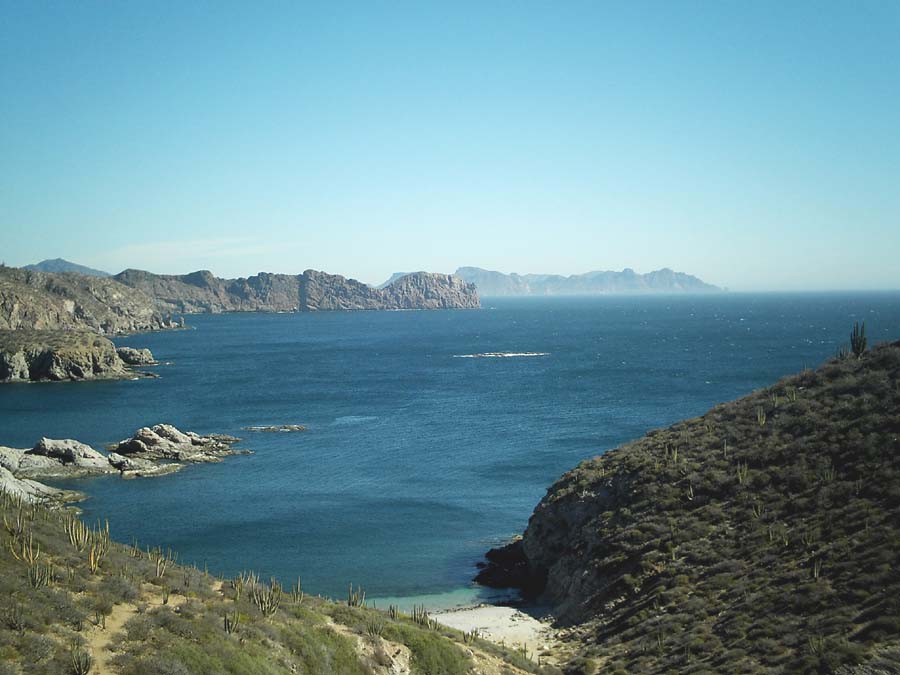 The route takes me onward: Sonoyta, Santa Ana, Hermosillo and finally today, the last day of 2014, to Guaymas, even further south in Mexico, from the dry desert to the humid air of the Gulf.

I pace myself each day because I simply do not want to drive a great distance each day and the roads, although paved, lined and often with wide shoulders, are not entirely smooth. There are rough spots; there are dips and places across the bridges (puente) where the pavement has not been made even. So the road is somewhat bumpy and it takes a continuing attention to drive especially when the rough and ready big trucks or the sleek modern busses whiz past me doing 110 Km while I am tootling along at a relatively easy slow 80 km, about 50 mph.

The kilometer to miles math is about multiplying the number of km by 6 and lopping of a digit to discover mileage. So, I am driving only about 120 to 150 km a day which is the distance between the stops I am making at the small towns along the way and quite enough driving for me.

First, there was Sonoyta where I found a truck stop to sleep at. Then on to Santa Ana where I drove up and down the streets until I found Policia station: I needed a map and some help to find just what I was looking for. Imagine that my still grade school sensibilities decided that the best assistance would be to stop in to talk to a policeman!

It worked: the man hunched behind the deep blue desk in the small dark office with a tall counter was a ‘son’ about 50 while the younger man who spoke un poquito englaise was like a grandson. He took me on a short walk up the street to a copy shop but the proprietor said he had no maps.

It was necessary to find a ride if we were to find what was needed. After the young man made a call, along came a cop car with a male driver and a generously built young woman carrying a semi-automatic rifle. She got out, I climbed gingerly into the jump seat and, with her taco built bulk, she filled up the passenger side again next to me: off we went around the town to find a 711 where indeed there was a very good plastic coated road map of Mexico. The next part of the ride was about attempting to cash traveler’s cheques but the exchanges only work off cash and already the banks were closed.

And so, back again through the ups and downs of the back streets of Santa Ana riding in the front seat of the Police truck until there we were back at the station. Tayna let me out with a most patient gesture. Muy Gracias.

As I cruised the streets looking for wifi gratis, I found a cyber café but he had a gaming set up with only a needed bathroom for me. Then a little more driving looking at the town, I spied a side street and as I entered, I saw a long high, brick plastered white wall with an ornate iron gate and a side yard where there were two well cared for horses one of them looking at me curiously over her gate.

Taking that as a good omen, I pulled around and parked the van behind the horse trailer. As I stayed waiting in the driver’s seat, soon there was a quite elegant, 60ish Spanish patron who came to see what I looked like. In about 2 minutes, we negotiated a one night parking spot and with a gentle handshake, a gesture of honor which I knew immediately, and I was ready to take time off as the golden hour just at dusk made the fields behind me glow pale golden, hushing to intense orange and finally fading to twilight. Sweet dreams.

Next morning I was ready early with frozen fingers to gas and find a free road off to the east at Magdalena but as I made the 11 kilometer ride over in that direction, I realized this was a toll road that went to Nogales. Not on my route. I waited till there was a gap in the heavy traffic of big trucks and went across the highway to the opposite direction.

At the OXXO store was a slender, educated Spanish man who gently, in English, advised me to go back to Santa Ana and take the toll road south (65 pesos) to Hermosillo from there.

It is always useful to take good advice.

This is northern Mexican desert country. It is everywhere planted as the Great Mother plants her garden with saguaro cactus, the smoke trees, with acres of cholla cactus that look like so many rose bushes ranging among tall grasses and some other kinds of green herb plants. I stopped along the road to eat my meal and to put out the carpet I have to stretch my back and to stretch the wide rubber bands that I am using to build strength into my legs and torso, and breathe myself among the amazingly lush desert land.

Finally, I came to Hermosillo, a quite large town even further southward on Route 15. I had made my intention to find a bank so that I might cash some traveler’s cheques. I was not about to run out of money so I gave myself a little space of dinero to make sure that I would not.

After one stop, I was directed to Bancomer a little further down the main road in Hermosillo where I parked alongside and made my way inside. Imagine that these banks are floored with natural marble tiles each different and all in the signature colors of grays with blue accents in paint, furniture and signage.

I went to the teller window to be greeted by a very lovely young woman. I pulled out the cheques I had, along with my passport, driver’s license, green card, and birth certificate only to be informed at once that the manager was not in the bank. A few minutes later, the senior teller, another truly beautiful girl, said that she had decided to cash my cheques and would I please be seated.

Well, it took her close to 2 hours to figure out the data base of American Express and finally at 3:56, I signed the cheques, signed the receipts and walked out with the cash I needed already changed into pesos. All it would take would be a stop later at an exchange to make some of the larger bills smaller.

Thank you very much. Have you noticed that it often comes down to the heart and to the women of the world? Muy Gracias.

Later I was able to find parking overnight at a Pemex station in a slot between an abandoned trailer and a truck parked in a side lot. The whole thing cost me some change for a tip. The dude at the pumps pumped the gringo dame for some dinero.

The perk was that I was across the street from a large hotel with a free wifi signal that blanketed the local area. I slept early after sitting so long driving and waiting at the bank to wake at 3am to blog and answer emails, then go back to sleep until the sun shone in my window about 8:20 in the morning.

The final leg of this part of the journey through the Mexican desert country, took me down the way to the shore of the Gulf of California to Guaymas, famous for its fishing fleet and large shrimp. I drove into town about 2pm in the afternoon to drive ever so slowly all the way through the busy town.

Seems not only were the locals out on the last day of the year, there were also quite a few out of state and foreign vehicles driving around amid the very noisy, well used buses, bicycles, taco carts, motorcycles and lots of people just walking around, shopping and talking animatedly on the sidewalks eating from various carts around and about. I took a lot of pictures to record the color and flavor of the town.

I have to imagine what I would have been like in the 1930’s and 40’s when certain Hollywood people found the place. The territory about is dotted with cathedral like rocky hills and sparse dry desert landscape right down to the shore line.

I did not see any campsites around this town as I had in San Felipe because it really is a much larger place and the shoreline is filled up with a immense fishing fleet.

I had spotted a Pemex truck stop just outside of town where I was welcomed into the back lot to park over night while the earth turned and the calendar changed into 2015.

I have to imagine there were many wild parties, lots of music, tequila, beer, dancing and assorted goings on in the town but that is not my style. You are being treated to this blog instead. I hope you found some time to party down while I am content here to watch the end of the day with incense and candles along with the avocado salad that I am about to make for myself.