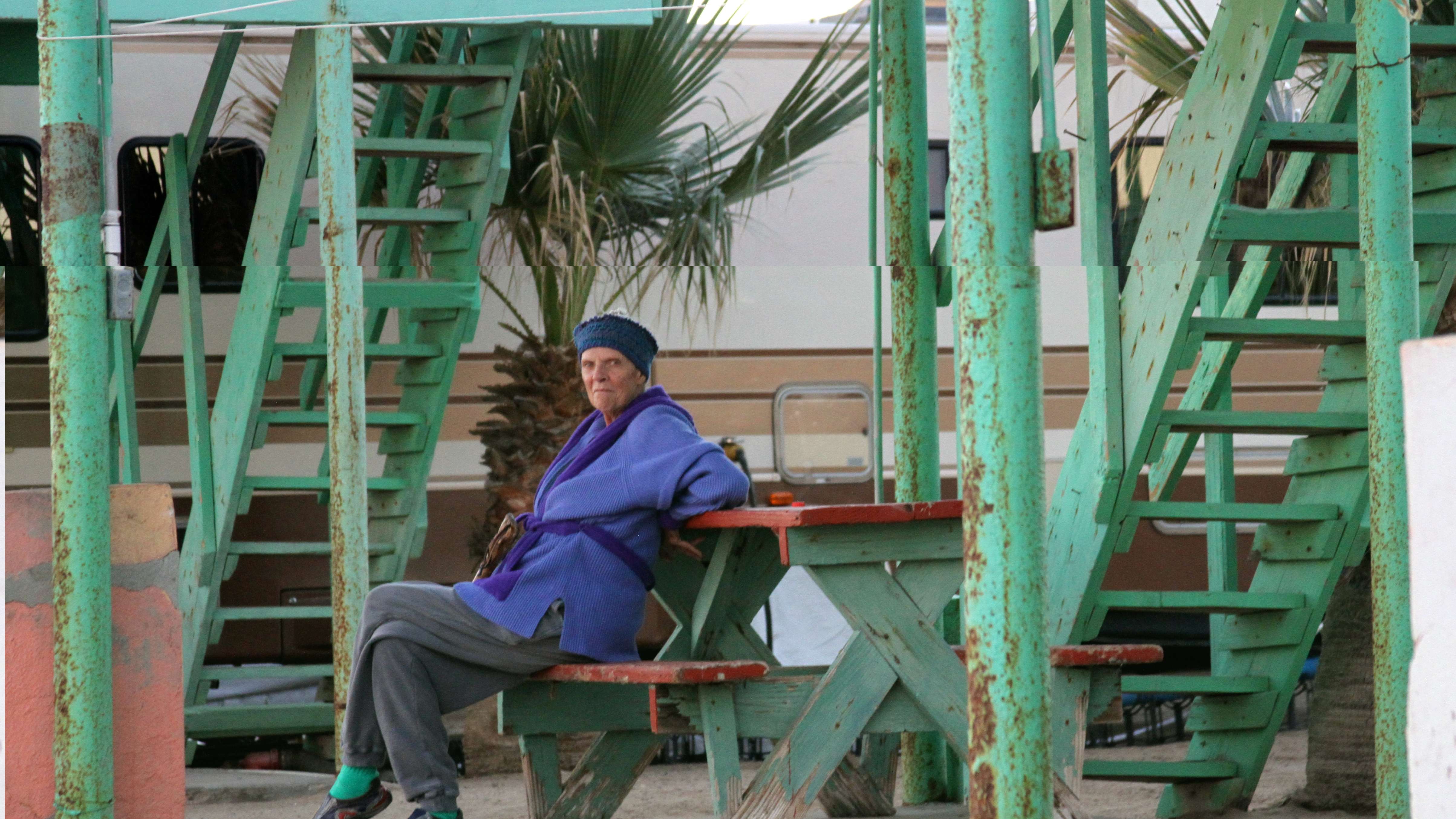 Older ladies, and probably gentlemen as well, are awake in the night. Sometimes I am awake for a couple hours, sometimes meditating, in the old time in the coach, I might be working on the computer or sewing. It is a sweet time, quiet and undisturbed because most of the rest of the world in my zone are sleeping, perhaps to be dreaming.

And I also waken rather more early here in the van because I do not put up screens across the windows to simulate the dark. Van life is a dawn to dusk reality.

Yesterday, I explored the yard where I am parked. It goes back toward the mountains behind quite a distance with a junk yard at the very rear piled in well rusted equipment, trucks, scrap metal, and a magical assortment of unrecognizable metal and wood stuff. There are lean-to buildings that somehow manage to remain upright, spanning the area beneath them also filled with piles of scrap. There were at least two very old mechanical machines which I do not know the purpose and one old old rounded fender automobile that might have been left over from the 1940’s. There is cactus planted and in front of a green painted plain house there was a mosaic stone and cement wall, a round table with the same benches four of them arranged around the table all fixed in cement and nobbed in stone, with stone pots growing with a certain succulent that hangs in hanks down to the ground. An old, small golden dog was asleep on the warm cement behind the table and benches. There was a sun-moon plaster plaque mounted on the wall next to the door of the small house that seemed to border the northern edge of the property.

At no time in the two days I was there did it seem anyone actually lived there, but there was still plenty of activity in the front areas of the yard. Grandfather and grandson came before 7 am to move their wheeled taco stand with a canvas roof painted as a blue ocean with fishes and a leaping shark spanning the deep fryer and counter top. This contraption rested before a shelter roofed with palm leaves under which they had brought a couple round plastic tables with chairs and the basket of condiments arranged in the center. Over the two days there were often groups of people arriving in cars or trucks, or walking over from the gas station waiting for their meals. My English mind was asking about how long the oil had been in the deep fryer but I could not sample the wares because ‘no dinero’. These two men worked diligently over the days providing their offerings and pocketing what was quite likely an adequate amount of money for their work.

Across the yard nearer to the gas station stood an old rolling kitchen truck now planted in the sand, tires flattened and dammed in by sand and rocks. The woman stood in the truck cooking dispensing beans and tortillas, enchiladas served on paper plates, soon to be ditched in the large barrel along side.

Many cars came, unloaded people who ate meals and soon left. Life was happening as the old lady in the funky red van watched and clicked many pictures. At one point, late Sunday afternoon, a truck and trailer rolled beside the taco stand towing a wagon filled with a miniature merry-go-round with an orange floor forming the sides behind which were the elephants, horses and ostriches of the ride set under all the metal machinery which was painted blue turquoise. A woman jumped out, went to the gas station store and returned with sacks of their packaged goodies to take with her on the way home.

Monday dawned crimson and soon the sun glowed behind the now overcast sky as I watched once more as life took its merry course. It was merry because of the people but not so happy as it was obvious these were hard working people whose life was hardly larger than the necessity to pull it all together every day to provide their sustenance.

I was, it seemed, a very rich white lady who could not speak their language. My own personal story had nothing to do with them and the distance between what I perceived as what was real for me and their reality was a chasm barely able to be spanned. I was simply parked for a day or two next to their places, observing them closely and here, writing a blog about it all to my friends who are also a very large distance apart and away as well.

Then it was necessary for me to drive away down south to San Felilpe to deal with the situation of ‘no dinero.’

I had discovered some sort of glitch in the gas tank apparatus that showed up as no gas in the jets when the switch was on the rear tank. When I first discovered it, I was somewhat dismayed that Bud and I had not thought of changing out the switch along with the fix on the rear tank. A couple of days just allowing it all to be what it was schooled me to simply run as I might, switching to the rear tank as long as it would and switching back to the front to continue the drive.

As it turned out, the distance that remained to San Felipe was short enough for the front tank to be adequate. Changing money in the small colorful coastal town proved timely for the first Mexican gas and the first schooling in gas prices measured in liters and the denominations of paper money in my hands. Along with some fancy gestures and stumbling English to Spanish and back to figure it all out enough at least to fill 14 liters in the tank for 186.74 pesos, whatever that might be.

And you are now receiving this blog post because on the roadway at the shoreline along with many side by side mercado that spill out to the sidewalk was a large gracious bistro with free internet and Rene, a young waiter who made me an omelette to eat along with the coffee he brought.

There is more to this story, so tune in. You may also download my e-published book, Raven’s Flight, now available for a very nominal $3,99 from Smashwords.com. I hope you will be inspired to read and to enjoy on any electronic device or by downloading a PDF file directly to your computer. We are, you know, very rich!. Love and Blessings, Amraah