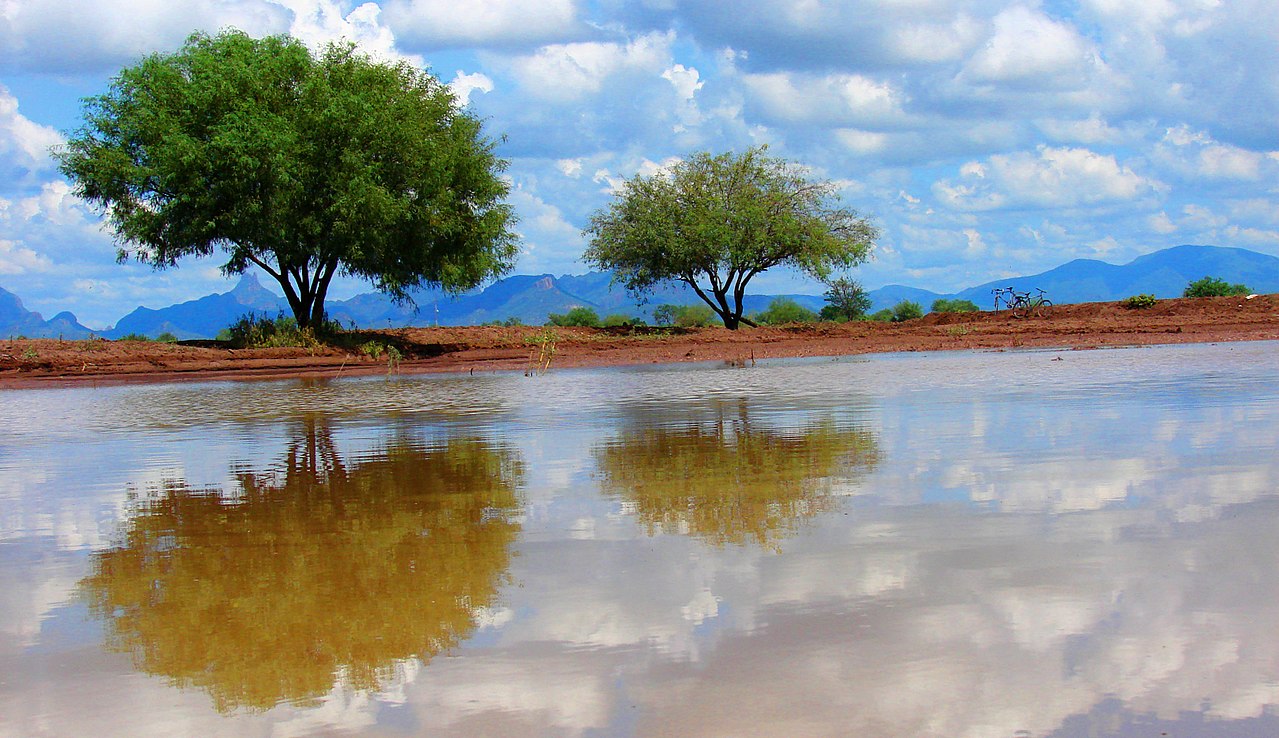 The entrepreneurial spirit is alive and well here in Mexico. It is pushing carts, it is under thatch and plywood board roofs along every highway, it is on the streets of the towns, in the parking lots of the glossy plazas, of Wal-Mart, along the boardwalks at the shoreline, on the right of ways along the highways, at the stop lights in the cities and just about everywhere! The vendors are young and old, many are men, some are women with their children, or there is a husband and his wife holding the baby and herding their offspring among the crowds I witnessed especially on New Year’s Eve in Guaymas.

Everywhere are shack and shanty businesses; they coexist with all the other kinds of service establishments built of cement block, plastered and painted bright colors with signs that are the same hand painted and colorful. There is everything from the llantera (tire) places along the highway, hat and belt vendors next to MacDonald’s in the towns, near the churches, in front of the rows of shops and assorted mercado that often sell much the same goods as the street vendor down the block.

All over the place are taco stands proclaiming carne asada, pollo or mariscos (meat, chicken and fish) usually rolled in a soft taco shell (presumably made from Mexican corn rather than American GMO corn #2) hand held with sauces or salsas in handy tall bottles to spice the mix.

Everybody eats at these carts and stands.

At the Pemex station where I was those first couple nights, the grandfather arrived before 7 am with his upright, neat grandson to push out his quite uniquely decorated rolling cart stand, fire up the propane burner under the kettle and get ready for the crowd of truckers who rolled alongside just long enough to eat up and clean up and be on their way. All day long, bursts of people from the gas station and from the local town congregated next to him and he obligingly cooked and joked and made them welcome. At the day’s end, with ‘adelante pronto’ to his grandson, they moved their tables and chairs and rolled the cart back into its waiting trailer for the night.

On that Saturday morning, a quiet young man rolled up in his CA licensed small car next to where I had been all night. From the roof of the car, he loosened 5 large sections of wire fencing each about 7×4 ft and placed them upright at the edge of the gas station parking lot, tying them to each other and to the tree under which I also found shade to steady them. Next, from several sacks he pulled the well known white cowboy type hats to hang them in their individual plastic bags from the wire racks. Along with these were about 3 or 4 dozen leather belts, black, tan, studded, glittered and buckled alongside a collection of wallets. And just to decorate for the season, there were placed 6 pinata to hang from the tree and from the taller parts of the racks. He stood all day there, often bargaining with the people who wandered over from the gas station. I do not know how well he did but it must have been okay because the next time I was there on the Saturday returning from San Felipe, there he was in the same black pants, jacket, the same cap, the same taciturn demeanor.

At the in-town Pemex stations, at distances from the standard OXXO convenience stores, the cart venders come with tacos to sell becoming a kind of competition for the bags of chips, candy, soda and cigarettes stacked formally in the store.

Along the highway towns, which are really only collections of small cement brick and plaster houses, often behind fences of sticks planted in the dirt strung with wire are even more vendors some with mobile carts, many under specially thrown up thatch lean-to stands; some have tables and plastic chairs; all are swept dirt floor areas, arranged around the propane fire heating the large pots of oil. There are primitive type art signs often on sheets of colored plastic hung as side walls around to keep the sun and dust off. The names match all the rest of the color: Mariscos El Rey, Asada Pepe Gonzales, Tacos Emily.

Take your pick and satisfy your hunger.

In San Felipe at the La Palapa camp where I stayed, several men and even a well burdened young woman came trudging through the camp with layers of ponchos over their shoulders or with bed spread type large printed cotton squares.

It is all fascinating how these people are everywhere vending, selling, hawking, and urging us to buy their wares. There are not many jobs to be had around and about, so people do what they do to make it every day. I do not know how they make out and they do in a way that must somehow provide the basics of their life.

What seems to be the most amazing is the obvious camaraderie which seems to exist amongst all the various members of their unofficial club from Mexicali, San Felipe, Sonoyta, Santa Ana, the back streets and neighborhoods of Hermasillo and now as I continue my travel southward to Guaymas and Obregon.

I have chosen quite purposefully simple, even old clothing so as not to look much like a tourist. My van has not been washed ever, I think, the most new and polished part of it is the hitch and spare tire rack on the back.

Still I am a mark because I am driving on the highways and through the toll booths, over the tomo (horrendous speed bumps in the towns) where people collect with bags of oranges, or fried pig rinds, even an old guy today with small cages of cockatoos.

Even so, in my former world, I am a thrift store maven, I am considered wealthy by these ubiquitous, very busy laboring people. I am moving through territory on my way to a far country and all the while I am learning what I could not learn any other way. It will be on me to use the experiences to make something of all this and with the people where I will be living. What will I give them?

I hope you will continue with me as I go onward. This Sunday afternoon I am at a MacDonald’s where there is free wifi and an alright cup of coffee to fuel the words. Enjoy yourself and if you simply must have more of this, please check out Smashwords.com with my pen name: Amraah Carole White and you will find my autobiography, Raven’s Flight. She is aloft today!